Checking Out The Zoo

Remember when I mentioned that I was so excited to see the ocelot kittens? Well we went all the way to Seattle just to see those kittens (okay we went for other reasons too, but I want you to get the idea of just how badly I Preston wanted to see these kittens), even got to the zoo, and didn't see the kittens. Why you ask? This place was huge. I thought we'd breeze through it in two, three hours max. We were there for almost five hours, and still missed a ton of stuff. Most importantly those damn ocelot kittens that I Preston wanted to see so bad.
We did however, see lots of other fun animals while we were there. I love the zoo. I'm so sad that we don't have one back home anymore. We have to travel to visit the zoo. Poor Preston, he's going to miss out on so many zoo trips growing up. Guess we'll have to visit Seattle more often!
Although for as much as Preston loves animals and seemed to love the zoo, he did give me a solid forty-five minutes of hell on Earth while we were there. I know what you're thinking. No, not this child. 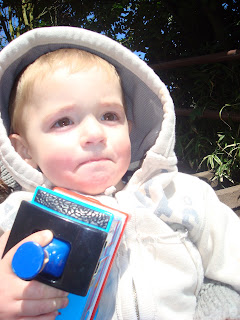 It started out so nicely. Preston loved the giraffes. Stared in complete fascination at the real live version of one of his favorite toys. Made kitty noises while we looked at the lions. 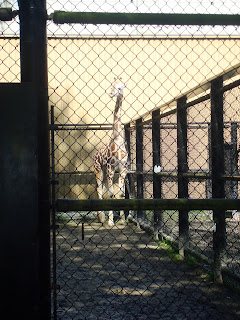 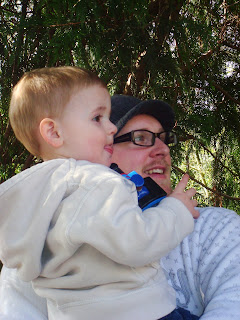 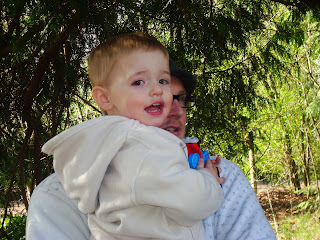 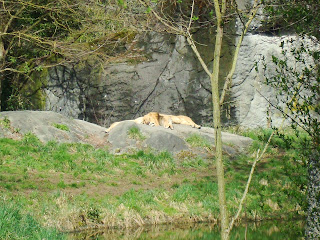 Then I made a mistake. Preston wasn't even interested in getting out of the stroller. But no, I wasn't content to leave him there. He was missing so much from the confines of the stroller. So I got him out. Fast forward to him deciding that he wants to drive his train on the ground while we walk around checking out the zoo. Did I mention how we were there for five whole hours and still didn't see everything. No way was I letting Preston dilly dally while there was so much to see. So I picked him up.
Big mistake.
He was furious. And that's an understatement. Nothing, and I mean nothing, would calm him down. We took him to see the elephants, where he briefly seemed to calm down because of the water in their exhibit and the many stairs to drive his train on. But as soon as we moved on he was back to kicking, screaming, and throwing his body around. He was putting on quite the show for those around us. A show I'm sure they didn't realize they'd bought tickets for. 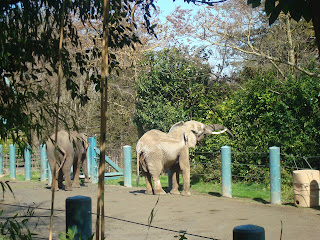 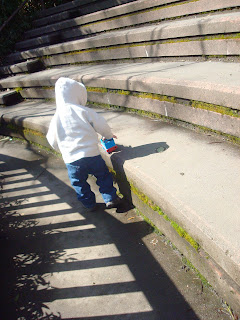 It took both Brad and me to strap him into the stroller in hopes that he'd be able to calm himself down without outside influences. After that failed attempt we flew through the monkeys. In fact I completely walked that Trail of Vines without looking at a single thing in my haste to find a bathroom. And that was what it took. Me finding a dirty nasting bathroom all the while promising him that if he'd stop screaming long enough for me to find a bathroom I would let him nurse. Something that he was not allowed to do anymore, except at wake-up and bedtime. What was I supposed to do? I was literally at my wits end.
Fifteen minutes later, he was good to go. It was like nothing had even happened. Preston was all smiles and ready to see the rest that the zoo had to offer. I gathered what was left of my hair into a ponytail and we trudged out of that bathroom to find Brad and his sister, Jen. I'm fairly certain that Preston killed any desire that Jen had to have kids after this temper tantrum. Hope he didn't want cousins. 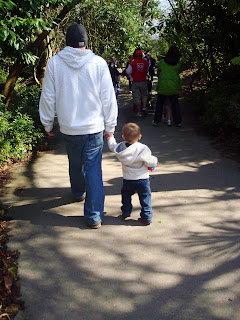 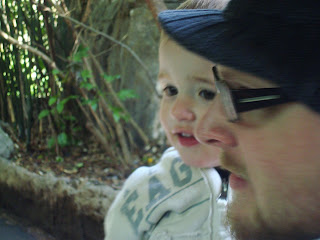 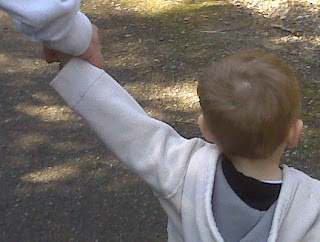 Preston then got to take another stroll through the Trail of Vines. Only this time we actually checked out the exhibits along the way. Brad and Preston even got to get up close and personal with an Orangutan. Through a very thick piece of glass that is. 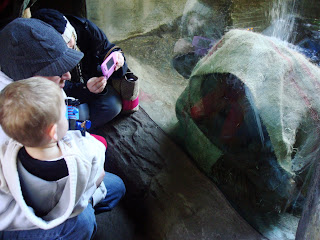 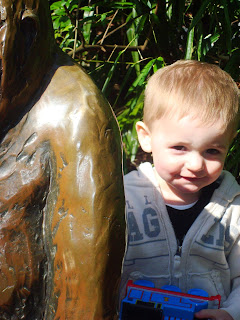 We then managed to get Preston to sit in the stroller with the promise of ice cream. What can I say ice cream runs in our blood. Which gave Brad and my arms a much needed break. Preston then sat entranced. I'm not sure if it was the animals or the ice cream that kept him so content. I'm betting on the ice cream. 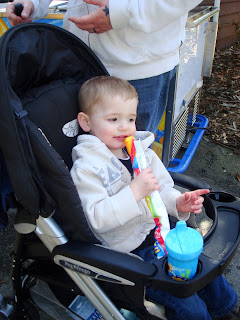 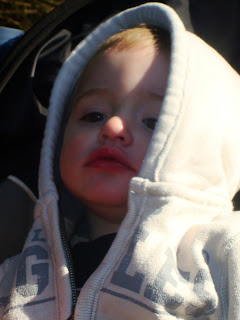 The stroller ride was short lived. It lasted less time than it took for Preston to engorge himself on the ice cream. But with his ice cream in hand Preston was in a great mood and ready to conquer anything. Even bears. 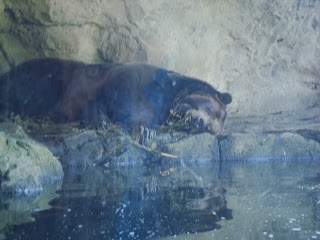 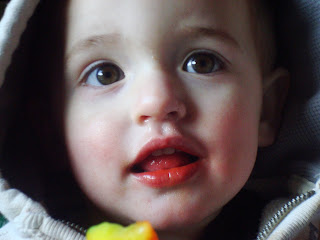 Once he was out we decided to follow Preston... 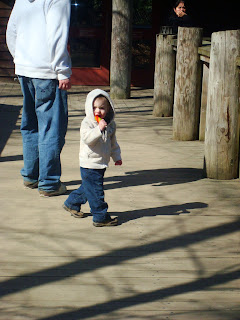 And along the way came across rocks... 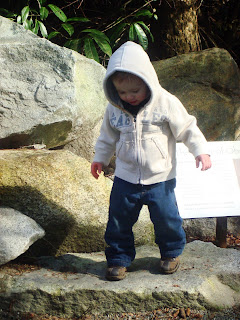 And turtles, who Preston very correctly pointed to with an excited "TURTLE!"... 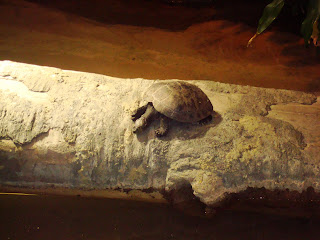 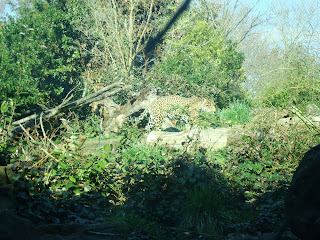 A stop for a very late lunch and we continued on. I was determined to take Preston to see those little ocelot kittens only to discover that we'd missed the exhibit closing by mere minutes. Minutes. Good thing Preston and I will be back in June with Courtney and Zeke. Preston was luckier than us adults and was able to take frequent sitting breaks while we checked out some more animals. 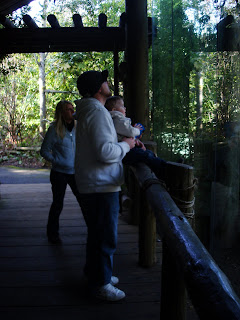 As we neared the closing of the zoo, I was exhausted. Something about chasing an energetic toddler will do that to you. Luckily for me, Brad and Jen had just enough energy to keep Preston on the trail with a few races to keep him focused on our destination. 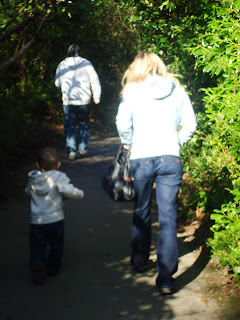 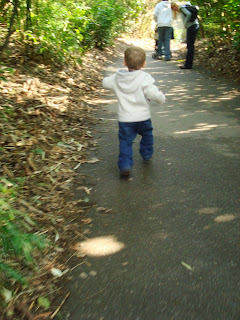 A final stop for a quick jump in a puddle and our day at the zoo was over. 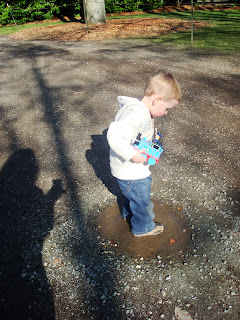 It was so much fun. I love the zoo! And can't wait to go back.

awww.I can't wait to take boone to the zoo. As for friday I made plans to go pick up my sister tomorrow from ellensburg and hang out with her for the weekend (she's 5) I don't get to see her that often so we can plan another evening...when's good for you? How's the kitchen coming?