Brad's sister was in town last weekend, so we spent Sunday at my Mother-in-laws house bbq-ing. Okay that a lie. I didn't do any bbq-ing. But I did do some bbq eating. That counts right?!

Preston was in such a good mood. I'm not sure if it was because we were outside or all of the attention that he was getting.

He kept Jen, Brad's sister, and Tammy, Brad's Mom, on their toes.

We started the day off with snacks. Where Preston took his duties of making sure Aunt Jen didn't go hungry very seriously. He'd look over, decide she might want a chip, and then he was there to help. It was hilarious. He kept shoving them in her mouth over and over again. She would try to tell him no more and he'd turn his sad face on her. Who can resist the sad face? Not Aunt Jen! 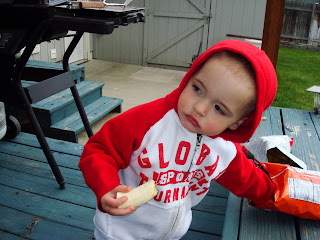 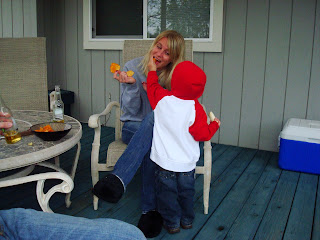 Preston then spent some time playing in the rock pit in Tammy's backyard. We're working on convincing Tammy to put a playset back there. Maybe I should send Preston and his sad face over to ask? 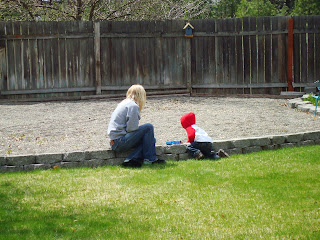 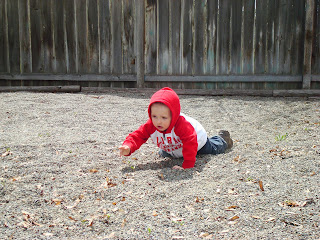 After refusing to come inside and eat his lunch, Preston took to playing outside some more. Only this time he insisted that Jen come along with him. Then after tempting her with a smile he revealed his bossy side. He demanded that they play the games he wanted to play. Which included lifting him up to touch the trees, falling over to the ground, and allowing him to climb all over you while laughing. 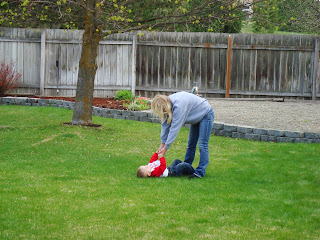 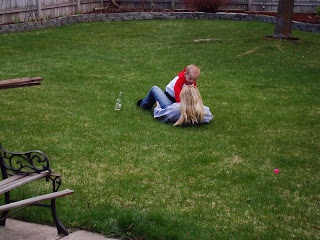 When Preston finally wore Jen out it was Tammy's turn. She brought out the exercise ball and helped Preston get a running start and do a somersault off of it. He loved it. 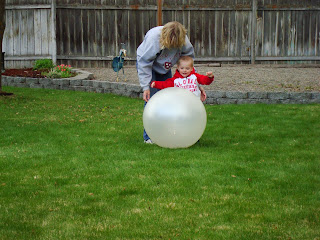 Preston was so tired from all of the playing that he fell asleep at 7:30pm and didn't wake up until 7:30am the next morning. Hmmm, maybe we should bbq more often!