What Was Our Kitchen

The construction company sent people out this morning.
Which was awesome minus the fact that they didn't call first or anything, so when they knocked, I was hanging out in my lounge pants and tank top, unshowered and braless. Good times.
They didn't seem to mind though since they only had eyes for my kitchen. One of them was very impressed by my new wood floors, I might add!
I'd just started a load of dishes, well half a load, because I knew that they'd be removing my dishwasher for a day or two and I do not like to handwash anything. In fact I don't think that I've handwashed anything since we got the new dishwasher last year. We picked one that would do everything for me! And when they arrived they wanted to know how long was left. In an attempt to be nice I told them they could just shut it off and I'd fnish the cycle when they left being that the timer on my dishwasher declared that there were still a whole 64 minutes left. How naive of me. They laid it on me. I may not have a dishwasher for the duration of this whole project! Like no dishwasher at all. WHAT!? That is almost a fate worse than death if you ask me. Fortunately Brad says there is a way to leave it hooked up and he is calling them tonight to see if he can get them to do whatever it takes to keep me from losing my dishwasher. I love my husband!
Steve, the guy running our job, and his partner in crime, who's name I didn't catch, began the demo just as my dishwasher cycle ended. Steve started off by informing me that at the very least I will be getting new countertops and surrounding tiles. Well if you insist Steve. I'm not one to stand in the way of getting something new for no extra cost.
After tearing apart my cabinets Steve and his PIC, (partner in crime) who's name I really will try to catch tomorrow, decided that it is there opinion that my cabinets are garbage. They simply can't be saved. Why you ask? Because I had a whole village of mold living under them. That village doesn't take kindly to the cabinets that were blocking them from spreading into the rest of my kitchen. Thanks for taking one for the team cabinets.
And PIC almost gave me a full blown heart attack. While Steve was outside, I asked if they could tell what had caused the mold. Our homeowners insurance actually doesn't cover mold since it's considered negligence. We are only up for coverage because I had our agent out after our icedam a few weeks back and he told me not to worry about it, it wasn't a big deal. Now it's a big deal. And because I tried to prevent the problem, it isn't considered negligence. Go me!
Back to the point. PIC said that they were still attempting to determine what had caused the problem. Since they'd only torn out one cabinet at that point, he said it could have been the ice dam or from an unnoticed leak. Not good. An unnoticed leak is considered negligence. And my husband is a plumber, wouldn't he have noticed an unnoticable leak?!
The answer is yes, he would have. After ripping out half of the kitchen and the drywall and insulation in one of our walls, Steve told me that this was most definitely caused by the ice dam. Breath a sigh of relief with me. The mold growth up the wall to the kitchen window proved that. This means that our insurance will be covering the problem.
Now we are waiting to have a utility sink hooked up tomorrow. Until then we have no water in our kitchen, so it looks like we won't be eating at home tonight. Not to mention that there is a machine running in our kitchen to clean the air. And the putrid smell of chemicals from cleaning up the mold.
Have I mentioned how difficult it is to have a 19 month old when your house is in the middle or major repairs? Preston can't play upstairs because of the kitchen and he can't play downstairs because the hallway is still unfloored and things are everywhere down there. What's a stay at home mom to do? We will be heading down to buy a Mobius pass and if you want to have us over to play we definitely won't turn you down!
As for whether or not we will get a brand new kitchen, that remains to be seen. Steve is one step in determining that. He says yes, let's replace everything. Then our insurance adjuster says yes or no. And finally both Steve and the insurance adjuster sit down and make a joint decision about what's going to happen. Hopefully they do soon. I hate not having any sort of a kitchen and the suspense is killing me! Luckily Steve says that my insurance company, State Farm, is awesome and that they like to get things taken care of quickly and typically do what's best for the client, that would be me.
Thanks my readers, for telling me that the appraiser will probably love that I'm getting a new kitchen. That thought hadn't even crossed my mind and now I feel so much better about having them out to appraise our house in the midst of all of this. And you've all convinced me, I'm hoping for a new kitchen!
Now for some pictures.
This was our kitchen when we moved in... 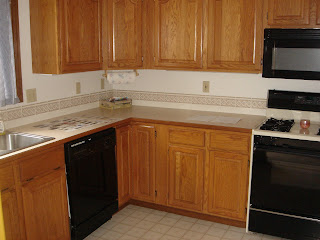 These two pictures kind of show what our kitchen looked like in the last few months... 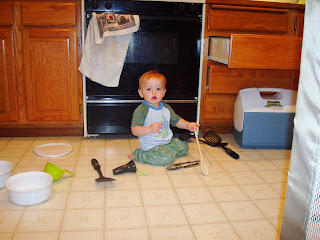 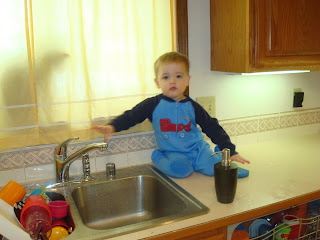 Prepare yourself, this is our kitchen in it's current state... 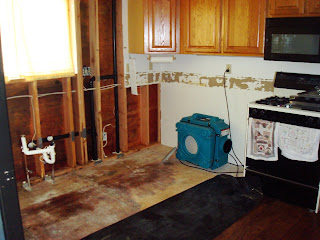 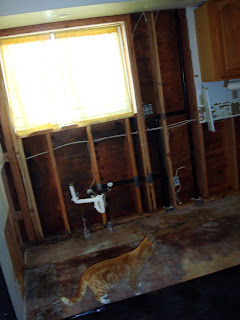 Quite a difference, huh?

So why did you rip out your whole kitchen?? I didn't think it looked bad!

Thanks for the comments...I don't know the best way to comment back either on here or just back on mine..so..but yeah I have tried everything offering for her to live here (she then stole from me) got her rehab, got her into AA everything I have no other options...

poor Kim! I feel like I never see you anymore :( and I dont want to wait until our trip in June! Are you free Friday? I havent decided if i am going to Sandra's or to Mobius that morning. So if you want you can choose, lol. We have a Mobuis membership now so I am trying to go regularly. Zeke really liked it.

Oh that does not look like fun! Gosh its been FOREVER since we've seen you guys (like try before thanksgiving I want to say!) holy cow! Well, if you wanna do something to occupy the boys, I'm game!! Just let me know :)