Our appraiser arrived 20 minutes early today. 20 minutes!
I was not ready.
In fact I'd just gotten out of the shower and put some clothes on when our doorbell rang.
Had she been on time, instead of early, I would've accomplished much more. I just know it.
For example I would have vacuumed up all of the Ritz Cheese Crackers that are currently residing all over my bedroom floor. Preston dumped them out last night and has been treating it as a 24 hour buffet that he holds a VIP card too.
Really it's been open 24 hours. As evidenced by the fact that my son who sleeps in on average until 8am everyday, and 10 am since the time change, was up at 5:30am this morning. 5 freaking 30. I am not a morning person. Preston on the other hand was up and perky. And snacking on those Ritz Crackers that he left out for later. At least he won't starve.
Back to the point, I totally would have vacummed those up. I'll bet that would've added tens of thousands of dollars to our home value. Thanks for screwing that up for us Preston! Looks like his dreams of going to college, they've been dashed. We just won't be able to afford it, all because our appraiser arrived 20 minutes early and Preston felt the need to add a 24 hour floor buffet to the pictures that were taken. Maybe she'll look at those pictures while she's hungry and it will work in our favor?
Fortunately our dining room was completely finished! I'm thinking that it will make up for the crackers on the floor in my bedroom. You know if the appraiser was judging us by how clean our house was. Which after her quick run through of our house I'm guessing she wasn't.
Want to see the dining room? You do, well here it is: 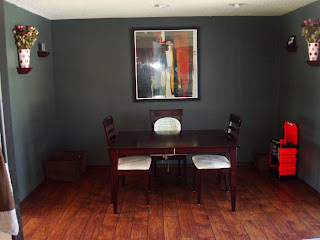 I love our new floors. What do you think?

The floors are gorgeous!

I was so confused...your posts werent on my list anymore and then I realized that I wasnt following you!! I was before, wasnt I?

PS, looks great. Amazing what a few hundred toys picked up will do...lol.

Beautiful floors! I can't wait for mine!