I am not a talk to strangers kind of person.

Sure if you seem friendly enough, I'll have one of those quick passing by conversations. But if I don't know you, don't expect much.

It's not that I'm trying to be rude, it's just that first meetings are awkward. Even more so when you aren't trying to meet anyone new at the moment.

Does that sound harsh? I don't mean it to be.
Perhaps my parents just drilled that don't talk to strangers thing into my head and it really stuck?
Let's go with that. Blame the parents.
Let me clarify. When I say that I don't talk to strangers that doesn't include new people that I'm supposed to be meeting. It means that random person in a store who for some reason wants you to stop and chat with them. About what? I'm not really sure.
Or that strange lady in the McDonalds play area. You know the one who will not leave you alone. Even though you're trying to shovel food into your mouth and your toddlers, while having a conversation with your Mom. That lady.
I met her last week.
We arrived for a late lunch. And I knew that I was going to have my hands full with Preston since he was much more interested in playing than sitting down to enjoy his happy meal. Go figure right? I'm not even sure why they include tables and chairs out there because no toddler is really going to sit down and eat when there are slides to be conquered and tunnels to be explored. 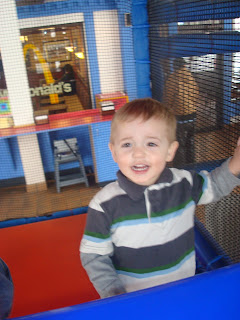 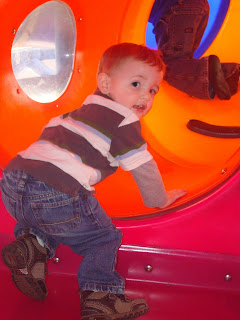 As soon as we walked in this lady is all up in my space. How old is my son? 19 months. Does he want to come play in the tunnels with her daughter? Well yes, but I would actually like him to eat. Thanks for asking. And on and on.
Bear with me, I'm not trying to sound like a brat. But like I said I was trying to eat. And it's not like I was there by myself. I was with my Mom. I was attempting to converse with her, which was already difficult enough with Preston deciding that he was done eating after each french fry.
I attempted to put forth effort in befriending this woman after my Mom left. Clearly she was lonely. Being a stay at home parent can be lonely. I get that. That's why I'm involved in not one, but three Mom's groups. To keep busy.
Then things turn a turn for the worst.
As I was picking up our table and throwing away our garbage, I look up to see my son hit her daughter. And to be clear, it wasn't a super hard hit or a punch or anything even remotely serious. He girl hit her. And she girl hit him back. Which the turned into them both girl hitting each other. It was actually a little comical. I want you to picture my son and a 2 year old little girl with their hands out in front of each other flopping up and down. Kind of like they would if they'd been doing some sort of a handshake.
Still my parenting instincts kicked in and I headed over to break up the fight. As did the little girl's Mom. She got their first since she was closer than I was. After separating the two, we both stood gaurd over our children. And then Preston attempted to move the little girl out of his way to get to a toy on the other side of her.
The little girl's Mom looks at me and asks, "Is he in daycare?" I'm a little confused for a moment and attempting to get my child in line, so I respond with a quick no. But she doesn't stop there, oh no. She stops and thinks for a minute and says, "Oh...is he around other kids a lot?"
WHOA, hold on there. It sounds to me like this complete stranger in McDonalds has just started to judge my parenting and I'm pretty sure it's being found below par. I attempt some sort of a smile and say that yes my child is around other children, but he is also only 19 months old, so this whole sharing thing and interacting with other kids thing is new to him. He's still learning.
I was more than a little offended. I am so tired of other parents judging mine and others' parenting styles. What works for you might not work for me. And not only that but your daughter hit my son back. You know just in case we were keeping score.
Rather than make a scene in McDonalds, I grab Preston's coat and decide it is definitely time to get out of there. I was going to invite this woman to join one of my totally awesome Mom's groups because she truly does seem lonely, but now she has not only invaded my space but decided that I'm failing as a parent. And to be honest, I don't feel like seeing her again.
Oh, and I must mention that as I'm putting Preston in his coat, her daughter runs over and pushes him. Hmmm, is your daughter in daycare or around other kids a lot?
No, I didn't say it. Rather I just focused on getting out of there as quickly as possible. I was tired of being forced into conversation by a complete stranger. Tired of trying to be friendly only to be not so subtly told that I'm lacking as a parent.
I realize that I am very likely overreacting. I'm pretty known for doing that. But still. I can't stand people who act like they've got this whole parenting thing completely figured out. You don't. It's a lie. I don't care if you have one child, two, or three; no one is a perfect parent. All of our kids act out. All of them go through a bad phase. The great part is that kids go through so many changes so you won't be stuck in the same phase for very long.
While Preston is currently figuring out how to share and play with other kids, soon he will understand that hitting isn't nice and friends share. I don't expect him to be there at 19 months. I know that we are getting there, but it's a process.
Can't I get a little bit of sympathy? Instead of a huge helping of judgement? I'm doing the best that I can. We all are.
In much happier McDonalds news, Preston tackled the slide all by himself. Not just once but twice. And he wasn't even scared. He just gave a little wave and away he went. 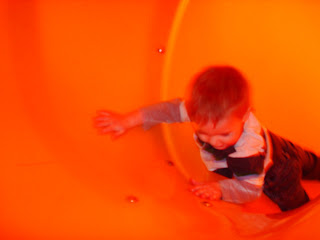 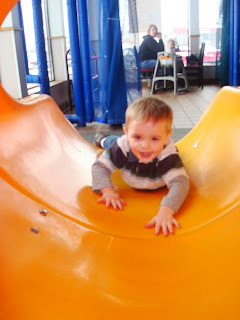 Harry got bit on the face by some kid in the tunnels a few weeks ago, so we're a little McD's and stranger-shy too. I can't stand pushy parents!!

I think you handled yourself like a pro, Kim. You have a very nice way of expressing what every mom feels in those same situations! Kudos to you!

I totally agree. I think some parents forget that they too had to go through that phase and that sharing and playing with other children is something that comes with time. It's so frustrating! I can't believe you were able to be so nice. After a while, my mouth gets the better of me!

Hey you I posted something for you over at my blog go check it out!!

I am glad that there is someone out there that feels my pain instead of just telling me to go read a book!! I read lots of books I still feel the same way lol...anyways..I would love to start a group and we could all come up with creative ideas to keep our spirits up that are lacking in other areas...But I totally know what you are saying!

On a side note I also think we should meet you sound like fun! :)

Kim, I think you did a great job dealing with a nosey parent. That is so annoying when you are just trying to relax and have a conversation, as much as you can that is with a toddler running around...lol! :)