Everyday it Becomes More Clear to Me

My little boy is growing up. Becoming more independent. A little less afraid. More sure of himself.
Take a few weeks ago for example (I told you I'm playing catch up!), we went to Chuck E Cheese. Yes, again. I told you I love that place. And so does Preston. And Brad. It's a win-win situation. 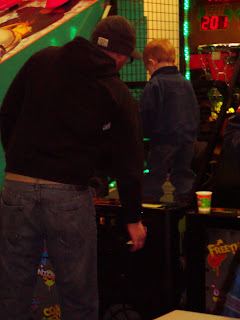 To the point, Preston is no longer overwhelmed by the crowd that is most definitely to be excepted at Chuck E Cheese around dinner time. He just takes off and heads for the toys that he enjoys. He used to stick to my side like glue, not anymore. Now I run around chasing him. Making sure he plays nice. Standing back just far enough that he can play like a big boy, but not far enough away that he can get into any trouble. 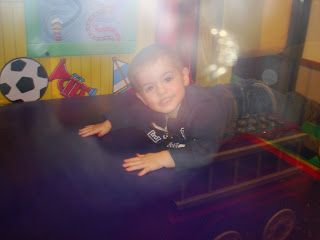 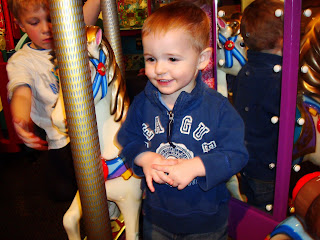 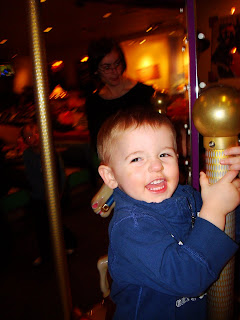 This trip to Chuck E Cheese however was monumental. Preston braved the tunnels. Now we've been up in the tunnels before. And yes, I did just say we. I play in the tunnels too. I figure what with the obesity rate in children these days, I'm probably smaller than some of the kids that play up there. 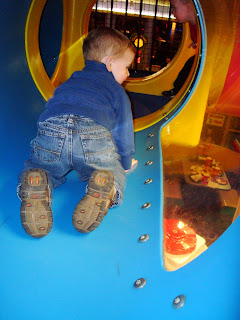 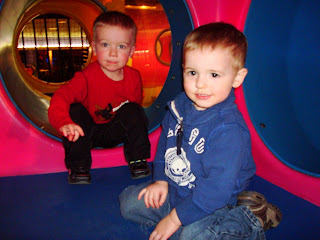 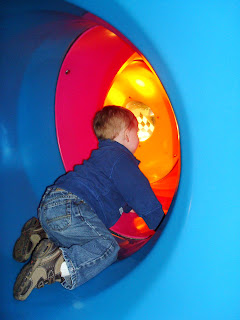 After going up once with me, Preston attempted to head up by himself. Only this time he did more than just attempt. He made it! Can you believe it?! Brad and I were shocked. I literally had to force myself not to climb up after him, you know just in case he got scared. Had nothing to do with the fact that I was terrified that my baby was playing up in the tunnels all by himself.
He survived. I did too, in case you were wondering. He even stopped and waved at us from up above. He didn't need me until it was time to come down. Preston wasn't quite ready to brave the tunneled slide by himself just yet. That's okay, neither was I. 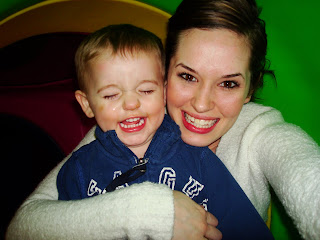 The next night he furthered proved how grown up he is. Instead of eating off the tray that attatches to his highchair, he ate at the table. Just like us. And he didn't have any problems. I am so excited to not have to clean that tray after dinner anymore. It's such a pain, it says "Not Dishwasher Safe". What!? All things child related should be required to be dishwasher safe. Just sayin'. 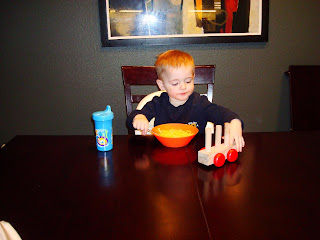 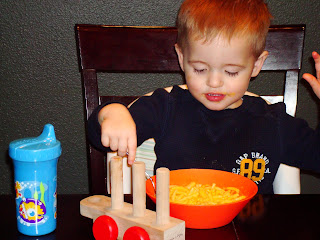 Preston hasn't grown up all the way. Thank goodness. He still needs me for things, other than changing his diaper and feeding him. When we stayed at my MIL's house last week, Preston proved that we share a common fear.
The dark. That's right, go ahead and laugh. I don't like the dark. It terrified me. I still sleep with the closet light on. Drives Brad crazy.
Preston would throw his balls down Tammy's, my MIL, stairs and then require me or another adult to take him down to grab the balls. At least until we turned the light down there on.
Then he was good to go. Until he threw the ball into Brad's old bedroom. It's really dark in there. Probably because there aren't any windows.
He came racing up to get me. Dragged me down and showed me his dilemma. A flip of the light switch and he's good to go.
Here's hoping that he outgrows his fear of the dark, since I sure didn't!
And my baby still hasn't out grown the cuddling stage. He likes to curl up next to me or in my lap when he watches movies. Or wants to hear a book. Or just needs a little bit of a cuddle.
He has grown up in his movie selection though. Preston's new favorite movies are Finding Nemo and Cars. He loves the turtles and fish in Nemo. And Cars, is pretty self explanatory. He's a boy and boys love cars.
In fact he loves Finding Nemo so much that when we were at Home Depot the other day it caused a little bit of a problem. My sister was walking him around while we grabbed the paint we needed. I looked over just in time to see her attempt to grab him and head back towards us and see him flip out. He did not want to leave what he was looking at.
Curious and nice enough to save my sister from a full blown temper tantrum, I head over. What is it that Preston had found, you ask? Finding Nemo wallpaper and very large stickers to match.
How cute is that? You know minus the temper tantrum and whatnot. Brad even went as far as sugguesting that we buy them and add them to the decor of his bedroom.
No sir! We are finally done decorating his room. No way am I starting over with Finding Nemo. Especially since who knows how long that will be his favorite movie.
Speaking of Finding Nemo, Preston also copies some of the things from the movie. Today when Nemo started calling out "Dad, Dad", Preston began walking around the house calling out "Dad, Dad". And there is a scene where the fish in the tank initiate Nemo. They chant, "Hoo, ha, ha, ha, Hoo, ha, ha, ha" and other noises like that. Preston has spent the last week or so walking around the house chanting that too. I couldn't figure out what he was saying until Brad told me that he was copying the fish in Nemo. Hilarious!

That's adorable! How old is your son again??

That would be fun to do a taco tuesday!! I have never been to one before and I love mexican food!