Two Days In A Row

Since Brad was out of town Preston and I had to find ways to keep ourselves entertained for two days without him. Hmmmm, what's a Mom and her toddler to do?? Hit up Chuck E Cheese of course. And not just once, mind you, but twice. Those of you who know me, know how much I love Chuck E Cheese and Preston is no different. The apple doesn't fall far from the tree.
The first night we went with my friend Ally and her nephew Emilio. Preston had such a great time. We got there early afternoon, so it was relatively empty. Which is always a good thing. Preston was even running off of no nap, so I was impressed with how well he did. We were there for 2.5 hours!!
During that time Preston played skeet ball (his version of course), climbed up onto a moving carousel (not bad, my little risk taker), and played some basketball. It's both fun and sad to measure Preston's growth by his Chuck E Cheese skills. We took him for the first time when he was two months old. He was too small to play on anything and only woke up long enough to nurse. We went again when we was five months old. He rode a few rides but mostly just seemed unsure of what we were doing and where we were. The next few visits included Preston riding the rides but making sure that Brad or myself stayed close by as there were tons of other kids around and he was nervous. The last three trips that we've made, I have to watch him and manuever around everyone else to keep up with him. He's all over the place. Racing around and climbing and enjoying himself. Quite a change. I've said it before, I'll say it again; Preston is growing up!! 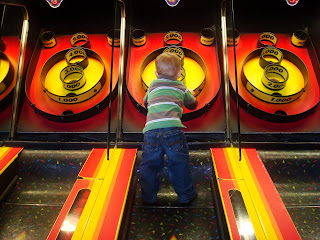 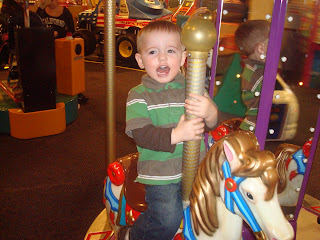 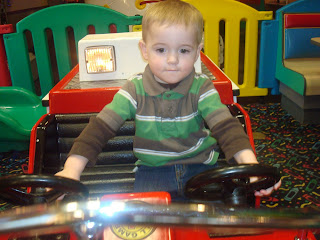 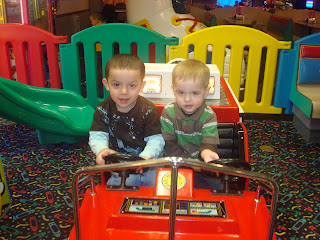 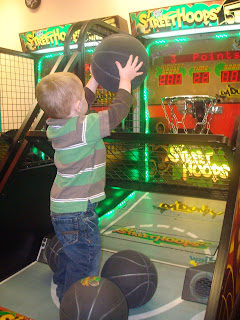 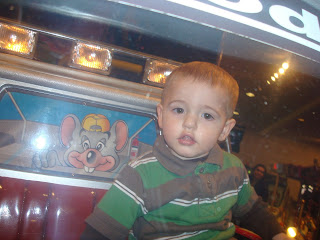 The second time we went with our friends, Kelly and Zack. This time we went for dinner and it was slightly busier. Not that Preston minded. I couldn't get that kid to sit still even long enough to stop and eat his dinner for more than five seconds at a time. He was more eating on the run than anything else. He played skeet ball again and I'm fairly certain that it's safe to say that this is his favorite game there. At least when he's playing by his rules, which some might call cheating. We don't, we call it winning!! lol. He also rode the carousel over and over again. And even climbed up into the tunnels. With me, of course. He's not that grown up. We headed up there twice before it was time to head home and if I'd let him he would have kept climbing up and sliding down that slide, he loved it!! 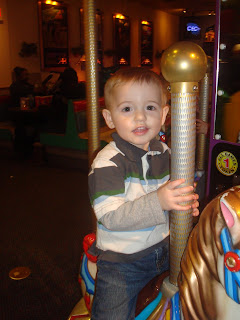 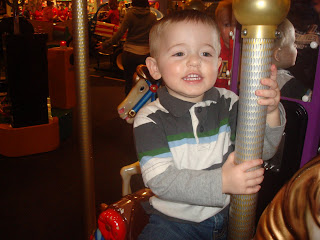 We are so glad to have Daddy back, but we did have a great time both nights at Chuck E Cheese. And luckily it seemed to be differently employees both nights so I'm pretty sure we weren't recognized as having been there two nights in a row!!

I LOVE Chuck E Cheese...when Brian and I take the girls, we actually fight over who has to watch the kids and who gets to play the games :D

We had fun, thanks for inviting us!