I mentioned in a previous post that I was getting the oil changed on my car. It took about an hour and a half so Preston and I were forced to entertain ourselves during that time. We did some playing in the toy room. I have been attempting to teach Preston his colors. Am I the only one who thinks that is kind of hard? I don't want to confuse him when I point at a yellow car and say yellow since it is also a car, I am just describing it. After searching the play room for any and all things yellow, he seemed to get it. I would ask him to show me yellow and he would point to the yellow beads. Then I'd hold out two cars and ask him which was yellow and he'd say yellow and point to the yellow one. It's much harder than I thought it would be to teach him colors. How did you teach your little ones colors? Any advice would be much appreciated! 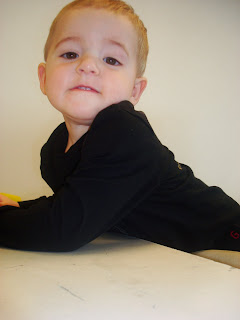 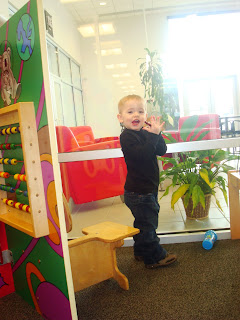 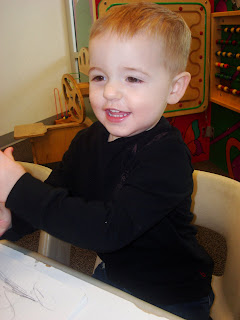 Also while we were there, we headed out into the display area to peek at the new cars. Preston was in heaven! He ran up and down and in between all of cars saying "car, car, car" and touching each of them. He's definitely his Daddy's little boy.

I must mention before I go, how much I am loving the new trend in public bathrooms of automatic everything! I don't have to flush the toliet, it does it for me. I don't have to touch the soap dispenser or the faucet, I just wave my hands under them. And in order to get a paper towel, all I have to do is wave my hands underneath the dispenser. Preston loved that he could wash and dry his hands all by himself without my help and I did too!

Just curious, am I the only one who is horrible about taking my car in to get it's oil change? I have the little sticker in my windshield and I really do watch my mileage and the date, but I still don't get in there when I'm supposed to. If my windshield wipper fluid runs out, well that's a whole 'nother thing. I make the appt that day and try to get in as soon as possible. Is it horrible that my car only gets it's oil changed when I can no long clean the windshields?

Hey Kim! I used to be a preschool teacher with the toddlers. To learn colors we would sit down and set out these rubber colored circles (at home you could make some out of construction paper or use different colored bowls). We would go over each color and then each child would take turns placing smaller items onto the color they matched. It helps if you take a bin of smaller objects (we used those colored counter bears but you could use any small object, they don't have to be the same thing) and ask him to pick one, tell you what color it is, then find which color it belongs on. Have fun and let me know if this works for you guys!

Well, I am 99% sure Teagun is color blind...so I have no tips. I am at a loss how to teach Teagun to recognize the differences (b/c from my understanding color-blind people associate colors with things - they know an apple is red so they remember how that looks to them to tell something else is red)...it is very frustrating to say the least!