Welcome to another installment of "Not Me Monday". This amazingly fun blogging idea was created by non other than MckMama herself. A great way to get the hilarious and embarassing things that you've done in the last week out, while laughing at others at the same time.

And now, what you've all been waiting for.

I did not find myself wishing that Brad's hometown was closer than the two hour drive that it is. Making a day trip out of that would not be awful and exhausting. I can think of no better way to spend a Saturday than sitting in the car driving for more than 5 hours total.

And because there was nothing better to do on Saturday but make the drive to Coulee City, I most certainly did not spend the first half of the drive playing on the internet that was provided by Brad's cellphone. Not me. I can handle a car ride without reading blogs, checking facebook, IMing a friend, and updating my blog. To not be able to sit in the car for a measly 2.5 hours without a laptop and internet would be just silly.

I definitely have not become addicted to Private Practice in the last week. And that addiction has not led me to watch all of season one and everything but that last two episodes of season two during naptimes and after bedtime. I have self control. And while watching Private Practice, which I don't do, I do not cry during at least half of the episodes or ask Brad life altering questions about what he would do if... Not me, after all it is just a television show.

I am not wishing and hoping that The Bachelor will pick Melissa. And if he doesn't I will understand and not think that he is clearly an idiot.

Yesterday when we took Preston down to the park to feed the marmots and the ducks, I did not forget to grab his hat. After all it was cold outside and what kind of a mother does that? As a result of forgetting his hat, I did not remove my scarf and wrap it around his head and neck for warmth. Didn't want his little ears to fall off, ya know if I'd forgotten his hat. And I didn't take any pictures of him wearing my clearly girly scarf and think about pulling them out when he was older. That would just be mean. 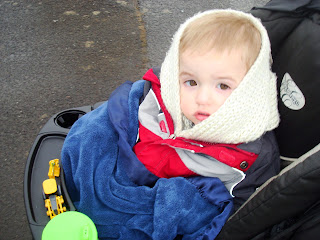 On the way back from Coulee City, when we stopped for dinner at Big Wallys I did not order nachos, french fries, a cheeseburger, and a burrito. And then proceed to eat all of it. Not this girl. That would just be silly. That's enough food to feed our whole family not just one member of it.

While loading up the car on Saturday I watched Preston run around the front yard in his excitement to be outside playing, even if it was just for a few minutes. And when he headed through the gate to the backyard, I didn't just let him. After all it was cold outside and he had no business in the backyard when we were already running late in getting on the road. And when he disappeared from my sight in the (fully fenced and unescapable) backyard, I didn't yell for Brad to chase him down. Did I forget to mention that there are still a few inches of snow covering the ground out there? I didn't want to trudge through that even though Preston clearly did.

Finally, Preston does not understand how the TV works. That would just be horrible for him to know at 19 months. And when he wants to watch Baby Einstein, he does not run over to the DVD player and start pushing buttons to make it turn on. And when Preston does this, I do not grab the remote and stand behind him and start his movie, then quickly set the remote down and congragulate him for turning his movie on all by himself. This does not cause Preston to smile real big and settle in to watch the movie that he started.

Now it's your turn, what didn't you do this week?

Labels: Not Me Mondays, Preston, Travel

hey great not me monday

I'm doing a new post called Tell a joke tuesday. It has mr linky so you can share your jokes or funny story that happend to you with the world

I did not beg my husband to bring home dinner from "anywhere, I don't care where, just don't make me cook tonight." BG

Thanks for stopping by and commenting!

Love the new look of your blog Kim, very cute!