It's that time again. The day where we share all of the things that couldn't possibly have happened this week. Not to us! A brillant way to get the stress out and laugh about the things that we never could have done. A special post created by none other than MckMama.

Now onto the things that I didn't, couldn't possibly have done this week.

A fair warning to my readers, if you don't have kids or are week stomached you may want to skip past the first thing that didn't happen to me last week. Don't say I didn't warn you.

Last week I was most certainly not taking advangtage of Preston's love of playing in the bathroom sinks by allowing him to do so while I soaked in the tub reading a book. I do not allow him to play on the counters just to have a few minutes of peace in the bathtub to myself. That would be horrible. And while I was not soaking in the tub and glancing up at him every few minutes, I didn't notice that he was calling for me and attempting to hand me something with each hand.

After a full thirty seconds of staring at him trying to figure out what on earth he could possibly be trying to hand me, I DID NOT realize that it was in fact poop! Did I forget to mention that Preston was playing on the bathroom counter naked? And that apparently when you've got to go, you've got to go.

Because this was not actually happening, seeing my son holding his own poop did not ruin my leisurely soak in the tub. And I did not climb out only to plop him in the tub while I proceeded to grab the necessary tools to sanitize my bathroom counter. That would just be disgusting, which is why I'm so glad that it didn't happen to me!

I am not so lazy that the other night after dinner I did not just throw one of my t-shirts and cinching waist boxers on Preston after he'd thoroughly messed up the outfit that he was wearing. That would just be ridiculous. Who does such a thing? Especially when you consider that the boxers were green with lovely pink watermelons. No boy would want to wear such an outfit, which is why it's such a good thing that this never happened. 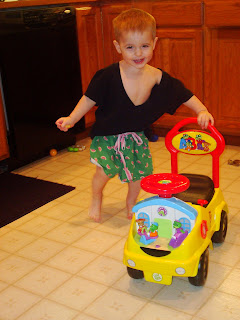 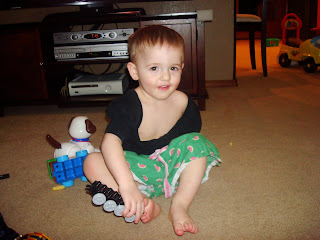 I've been raving about Costco lately and love going shopping there. I never leave without enough to fill the trunk of my SUV. Which is why it's such a good thing that I didn't leave Costco with a basketful only to open up the hatch and discover the trunk already full of other miscellaneous items. No, not me.

And I did not just google the word miscellaneous to make sure that I did in fact spell it right. And this wasn't a good thing because I had butchered the spelling of the word. Not, this perfect speller.

Lastly I did not attempt to get Preston to eat a healthy snack this week by setting an individual carton of caramel next to those apples. What kind of Mother do you think I am? I would not do that. We eat healthy in this house all the time. 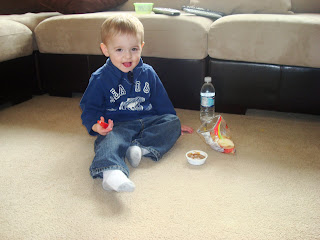 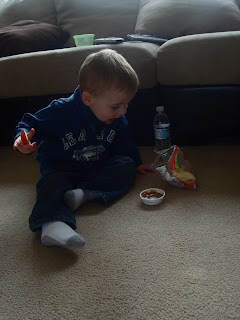 And that is not an already cut up bag of apples. I would not waste the extra dollar or so that it would cost to buy already cut up that have already been put into snack size bags. I am perfectly capable of cutting my own apples, so that would just be silly. Not to mention lazy. Good thing I didn't do that!

Now it's your turn, go ahead and tell me all of the things that you didn't do this week!

Labels: Not Me Mondays

Um, as Aidan gets older I am sure I will enjoy posting my own "not me Monday". We aren't that eventful yet! Did you get those apples at Costco? They come in a bag and the bags are in a plastic tub thing? I LOVE THOSE!

What happened to being careful to buy only what you will eat miss costco?