Preston has become a terror to shop with.

He just wants everything.

Forget walking through the toy aisle. That's not going to happen anymore. He points, he screams, he demands, I cave. The child has more toys than anyone I know. And yet I can't get myself to say no. Stand strong, I tell myself everytime we hit the toy aisle. Until he sees something he has to have, and I somehow end up convinced. He really does have to have it.

Now I've taken to avoiding the toy aisle like the plague. We can't bring anything else home. I'm running out of room to put things.

Oh but it doesn't stop there. Oh no.

At Walmart with Brad last weekend we were looking through the lightbulb aisle. Preston was getting antsy and wanted to walk around. I obliged. He's been wanting to walk through the store with us now and he does hold our hands, so there is no harm.

Preston began browsing the lightbulbs in the aisle along with Brad. He was declaring most of them as "ball, ball". The shape had confused him. Then as I turned to ask Brad a question, I turned back to see my son tossing lightbulbs into our cart. Apparently he needed them.

Isn't that something that older children do? At 19 months he just seems too young to be sneaking things into the cart.

I do remember those days. I had sneaking things into the cart down pat. I would distract my Mom, shove my desired item(s) into the cart, and keep talking the whole time. At the checkout (and this is important), I always unloaded the cart for her. You know to be nice. This way she didn't notice that there were a few items in the cart that she hadn't approved. She wouldn't notice until we got home and she was unloading the bags. Where did this shirt come from? How did these cookies get in here? I didn't pick this eyeshadow. By then it was too late for her to do anything. After all who wants to make a trip back to the store to explain that I didn't mean to buy this my daughter tossed it in while I wasn't looking? My Mom sure didn't.

He now likes to get out of the cart and check certain things out. My fault as I started this one. I thought it would be cute to let him see all of the toddler sized cars at Toys R Us. Then I let him climb in a few to check them out. It was cute. He's so car obsessed, he just wanted to try them out.

Now he doesn't understand why I don't let him check out the cars when we go to Toys R Us. So he cries until I do. And I give in.

At Costco the other day they had an Escalade out for display. Of course Preston had to try it out. This one was Brad's fault, by the way. However when we returned with my Mom a few days later, Preston didn't understand why he could't sit in the Ecalade again. Out of the cart he went. 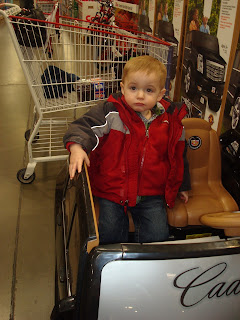 Then he moved down the aisle a little bit to the outdoor playhouse.

Why does Costco put these together and set them out for little kids to see? Oh that's right so that you'll give in and buy them. I didn't go that far, not yet at least. Preston does have a birthday coming up...in July!

Preston races into the playhouse. Closes the door while waving good-bye to me. In my mind I can already see that this is going to be bad when it's time to leave the playhouse. He's having a blast. Cooking, looking out the window, saying hello to me and my Mom, this thing was awesome. 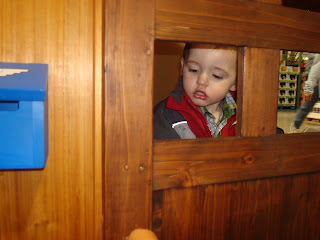 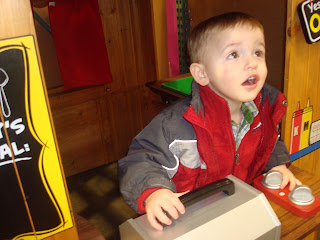 Until I was ready to move on. Preston would not come out. I mean would not. I reach for him from outside the door and he moves farther into the playhouse.

I had to climb inside with him and pull drag him out. Then carry him while he cried and tried to escape to get back to his playhouse. Clearly it had made an impression in the few minutes he'd had with it. He'd even forgotten all about the Escalade.