Growing Up, The Good and the Bad

Preston's been going through a lot of changes lately. He's getting bigger and his attitude is changing. The way he plays is changing. What he plays with is changing. Even what he eats is beginning to change.

This is great and horrible. Sad and exciting. But it is definitely happening and there is not a single thing that I can do to make sure that Preston remains my baby forever. Not that I really wanted him too. I like seeing all of the changes and watching who he's going to turn into.
I noticed a major change today. We went over to our friends Kelly and Zack's house to play. Preston was shy and clung to me a little bit at first. Then he warmed up and he was all over the place. He wanted to play with everything. This is when I noticed a change.
Preston interacts a lot more now with other kids. Especially with Zack. I don't know if it's because they are a few months apart in age or because Zack is so willing to play with him.
Just a couple of months ago when Preston would play with other kids if a disagreement over what toy was whose occured, Preston just moved on and played with a new toy. He didn't even bat an eye. He didn't seem to understand that possesions was nine-tenths of the law. And he didn't care. He just wanted to play.
That Preston is gone. He has been replaced with this new Preston and this new Preston isn't nearly as easygoing.
Today when Preston was playing if Zack attempted to take what he had, Preston would scream. Then he would fight to keep it. He would try to flee, if that didn't work than he would shake his hand around to keep the toy from being caught. As a final resort Preston would throw himself on top of the toy. He was unwilling to give up this toy. Preston was learning to stand up for himself. He can hold his own. It was a fight to the death. Or loss of the toy, if you're not one for dramatics.
I wish that I could say that it was only Zack who stole toys today, but that would be a lie. The new Preston is also a little bit of a thief. Or an attempted burglar. If Zack had something that Preston decided he wanted to play with than Preston went after it. There were no ifs or ands about it. If he could see it than it was considered his. Unfortunately this is not so. And I am struggling with how to teach him to share. That possesion is nine-tenths of the law even at playdates, so if someone has something first than you do not get ot just take it away. I have a feeling it's going to be along process, that we will be learning for months if not years to come. Wish me luck. And if Preston takes a toy away from your child, please forgive him he truly is sorry. And if he isn't, than I am.
All in all though, Preston seemed to have a lot of fun playing with Zack today. He got to interact and hopefully learned from it. I'm glad that he is now more of a playmate for Zack. And I know that I had a good time! As the pictures below show I think that Preston and Zack are going to end up being good buddies! And I swear Zack was laughing and smiling during all of the tackling. Really! 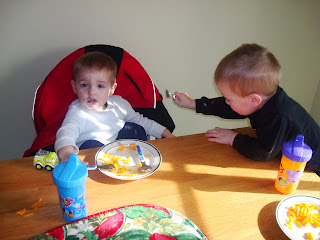 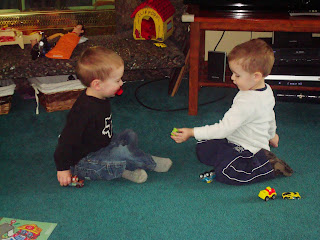 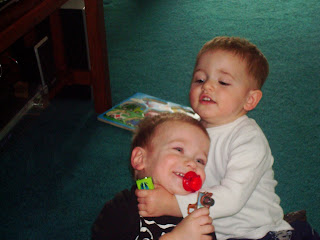 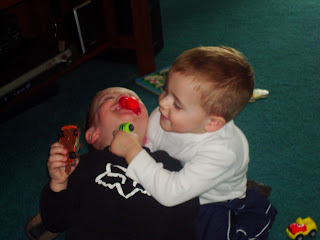 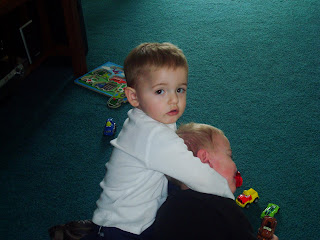 Cars have become the main source of entertainment in our house lately. Cars of all shapes and sizes, in every color. We have the matchbox cars, the mid-size cars, cars that make noise, cars that are silent, we even have construction vehicles. Preston doesn't have much of a preference as long as they have wheels and he can make them drive.
Lately he isn't content just to drive them on the floor, he has to get them onto some sort of a flat surface so that they can really cruise around. It's fun to watch the thought that he puts into playing with these cars now.
Tools have also taken up a lot of playtime in our house recently. He got a toolbox from my Aunt just before Christmas and we filled it with more toys than he knows what to do with for Christmas. He will play with Brad and Preston watches closely to see just how everything is supposed to be used. Then he gets to work.
Why is it that boys seem to be pre-destined to play with cars and tools, while girls are more interested in baby dolls?
Even his eating habits are evolving. He's still just as picky, but he eats so much more. He could live off macaroni and cheese, grilled cheese, pizza pockets, and french fries as his staples. In fact for the most part he does with the exception every now and then. Now he is also noticing a lot more about his food. For example he refuses to allow things that he doesn't want to eat or won't be trying to sit on his plate or his tray. They must be removed. And if something doesn't appear right in his food he hands it over to me. He's gotten a little OCD about it.
I wanted to share Preston's bedtime routine. Mostly so I don't forget it. So prepare to possibly be bored, as it's not exactly exciting.
Preston takes his bath. He even brings his cars in with him. From there we move on to a diaper and getting dressed. It never goes as smooth as that however. For the last two weeks or so, as I struggle to put a diaper of him or reach to grab one he escapes. He then takes off running for where Brad is sitting on the couch. He climbs up, plops down on Brad's lap, and acts like he thinks he's escaped bedtime. He knows he hasn't, I know he hasn't, even Brad knows he hasn't; but it's all apart of the routine these days.
When he's finally dressed, hours later. In reality it's minutes later, but some night after all of his struggles it just seems like hours. We move on to story time. We read anywhere between four and six books every night. Preston loves to listen and I think reading is very important so I'm more than willing to read a few extra books every night.
Onto nursing. Which will soon be a thing of the past. I've gotten it down so that he now only nurses for two-three minutes before bedtime. And into the crib, with a hug and a kiss followed by an I love you.
Preston must sleep with two of his blankies. Yes, they are the same blankies. We have seven of them, so sleeping with two really isn't a huge deal. But when I lay him down he doesn't want his blankie over him. He brings it up over his head and I "fluff" it for him while he flips over onto his tummy and then I tell him to lay down. And he throws himself onto his blankie. It's used as a pillow and a cuddling device. I tried buying him an actual pillow last week and he demanded that I remove it from his crib on the second night. So we're sticking with the blankies. Then he's out. All in all once we're out of the bath, bedtime takes somewhere between 15 and 20 minutes.
Hopefully even while he's growing up, Preston will always have that 15-20 minutes at the end of the day to give to me and Brad! Because growing up, he most definitely is!

*Damn that stupid binky!* Thanks again for coming over today, it was fun! The boys did awesome. Don't worry, Preston's age is a tough one. You both are doing a great job. I think sharing takes toddlers a long time to understand. Look at Zack, he's 10 months older than Preston and he still doesn't get it all the time. Hang in there, you're doing a great job...the both of you!