You Know Those Moments...

Where you wonder; why, why, why did I become a parent?? I have had a few of those in the last twenty four hours. Don't worry this story has a happy ending.

First last night when we arrived in Richland. We were obviously much much later than I'd planned, see previous post for details. And Preston had fallen asleep during the last half hour of driving. Not good!! It was too close to bedtime for a quick nap. So when we arrived and I woke him up getting him out of the car, I knew we were in trouble. He was wired!! Running around the room screaming and yelling and laughing and playing. Not a big deal at home but here it is. We were in a hotel full of business people who were going to be getting up early for conferences all day. And as Brad reminded me last night when it was 10:30pm and Preston was still wired and racing around, we are in a "comped room" because Brad is here for work. I'm sure that while it is bad to get complaints when you are paying for your room it's much worse when the room is free. Luckily we made it through the night without any complaints and I was able to force Preston into his playpen around 11pm and after 15 minutes or so of playing he was finally asleep.
The second moment occured when we headed off to Target this morning. Preston refused to sit still while I found and gathered all of the necessities that were still sitting at home in our bathroom and a bathing suit so that I can take him swimming while we are here. I even attempted to entice him to stay seated in the basket with three new toys; a noisy but fun police car and two hot wheels cars. They kept him entertained for a few aisles and then he tossed them in the basket and stood up to get out. He then decided he wanted to help me put things in the basket, so I would hand him what he needed and he would drop it in. This was fine and dandy until he decided that instead of dropping things into the cart, he was going to chuck them across the aisle. Freaking super!! And at one point he also decided that he wanted down and did NOT want me to pick him back up. It was hell!! Made even worse by the fact that I couldn't just leave, we desperately needed these things. As evidenced by my sloppy hair, unbrushed teeth, and lack of facial moisturizer and make-up. It was so awesome people. I'm not kidding when I say that I was very glad that we were three hours from home and I wouldn't be running into anyone I knew.
Take three of Preston's horrible-ness. We get back to our room with lunch. And Brad has met us outside to help me carry everything in and take him lunch with us. I stick Preston in his high-chair, I remembered the high-chair but not the bathroom stuff. And give him a carton of apple juice. He squeezes it and soaks his french fries and tray so I remove it and set it on the floor where he can't reach it...yet. When Preston is done eating, Brad lets him out of the confines that is his high-chair and I look up from my food a minute later to see Preston squirting the apple juice all over the floor and laughing. I jump up to take it away and as I'm cleaing that I look over just in time to see Preston grab Brad's iced tea and dump the whole thing out all over the floor. I was so angry that I didn't even say anything I just walked over to grab a towel. At which point Brad sees my face and having seen what Preston has just done says, "good thing the room is comped right??" Amazing how I've heard that twice now and once it was a bad thing and next it was a good thing.
Just as I was sitting down for a moment after Brad had gone back to work, I realize that Preston is being very quiet. Dreadfully I stand up to go see what he is doing on the otherside of the wall. And come across my adorable and sweet little boy playing with his new cars from Target quietly in the bathtub. He'd climbed into the empty bathtub fully dressed so that he could drive his cars along the ledge. All of a sudden I know without a doubt why I became a parent. Moments like this, where I love Preston so much I think that my heart could just explode!!! 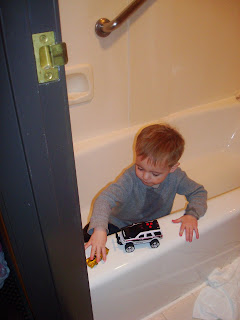 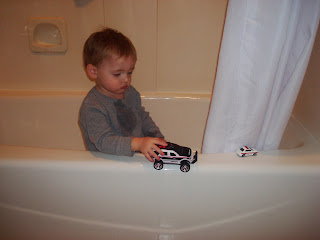 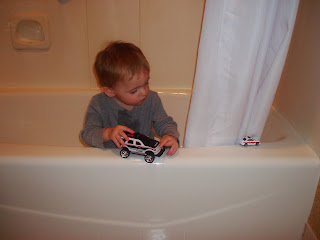 Oh I can't wait for the days of toddler hood.

I am so glad you and Preston got to go on the business trip along with your HUSBAND!