I'm going to be honest here. I'm a little bit freaked out. I plan on completely switching over to blogger exclusively on the 18th from Preston's baby website. Why does this freak me out?? I am worried that I won't be able to stay on top of all of the new and wonderful things that Preston does that I want to remember, as well as the horrible and hilarious things he does as well. It's going to take some work!! So let's begin by playing a little bit of catch up.
Last week, I decided that I was having a serious craving for chocolate chip cookies. I'm talking serious here people. So I grabbed everything that I was going to need to make said cookies and then decided to let Preston help. Now I will admit at first I was a little bit nervous about whether he'd be a helper or just in the way. But he was very good about helping. He sat on the counter while I mixed everything together and measured everything out. Then I pulled out the mixer. He knows this makes noise so at first he was a little bit scared. He stood up and reached for me to hold him. I know what he was thinking, "No way you are leaving me alone on the counter with that thing Mommy!!". But as soon as I turned it on he wanted back on the counter to help mix it, and not long after that he didn't want my help mixing the dough at all!! Which was a battle in and of itself. But we had tons of fun making cookies and when we were done Preston even helped me lick the little mixing things clean. He gets that from his Mommy!! These poor cookies didn't last long either. Even though we'd made at least three dozen, they were ALL gone within three days. I cannot figure out how this happened. I know that me and Preston both had a few of our finished product and Brad did too. But what happened to more than thirty-six cookies in less than seventy-two hours?? Honestly I think we were robbed, I'm going to start checking the doors and windows much more thoroughly before I go to bed. We will not be the victims of cookie robbery again!!! 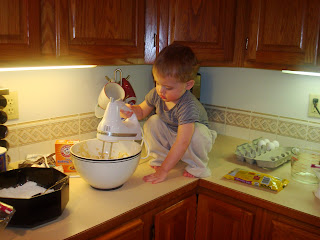 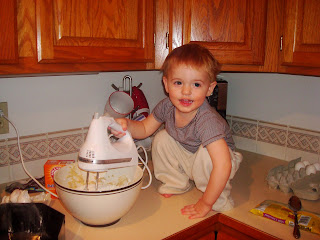 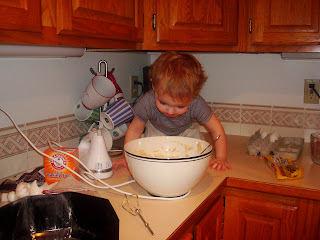 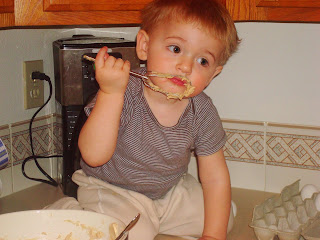 Preston has also started to not only mimic words but to use them in the correct way too. On Sunday night he was hanging out with Brad, while I was at Bride Wars with Kait and Jenn, (Sidenote: AWESOME movie!! We laughed, Jenn cried...lol!!). But back to the topic at hand, Preston and Brad were just hanging out eating everything in sight except Preston's dinner. Boys!! One of their decided upon snacks was crackers and cheez-whiz. Preston has never had this kind of cheese before because I cannot stand the smell or the taste, lucky for him Brad can. So Brad was loading him up and Preston was loving every cheese filled minute of it. Well when Brad stopped Preston looked at him and said, "more". That's right Preston said "more"!!! That is the very first time that he has verbally told us some sort of a command. And I missed it. :( I guess I'll survive, I mean the movie was really good and it's not like Preston doesn't boss me around all day anyways; verbally or not. :P
Then today Preston decided to show me his newfound voice by telling me what to do. We were at Target and he was refusing to sit in the cart, so I carried him until my arm felt like it was going to fall off. When did my baby get so heavy?!?! And so I very sweetly asked Preston if he would sit in the cart PLEASE. And he looked at me and said, "no". He said "no"!! Not just a shake of his head like he used to do, he actually said "no". I'm sure that after hearing this word from him a few more times I won't be quite so excited, but right now I am so proud of my little boy for telling me "no"!!!
One last Preston update. Brad taught him last week how to squirt a little squirt gun. The things Daddys teach their sons!! Preston is very excited about this new skill. He runs around squirting everything in sight and races over to me when the gun is empty for a reload. Our cats on the other hand are not so happy about Preston's new skill. They have become moving targets. When you fill the gun Preston goes on the hunt. He chases them down pulling that little trigger the whole way. It's hilarious, talk about cheap entertainment; a one year old, a squirt gun, and three cats!!

You didn't have to tell everybody that I cried! C'mon!!