A Good Thing or a Bad Thing??

The last two days have been big days for Preston, chorewise!! Not because I made him, but rather because for some reason he LIKES to clean. Seriously!! If he hadn't popped out of me than I would not believe that this child was mine. I am so anti-cleaning, it's not even funny. Maternity test anyone?? I'm totally kidding, like anyone else could have given birth to such an adorable child!!

But back to the cleaning. In the morning I decided to unload the dishwasher. And for some reason I walked out of the kitchen and came back to Preston unloading the dishwasher. He was standing on the dishwasher door and had pulled the top rack out just enough to start pulling cups out and setting them on the counter. He was so proud of himself. And I must admit, I was too. He's such a little helper, when he's not dragging all of his toys out or spilling his bag of french fries all over the living room floor like he did this afternoon. 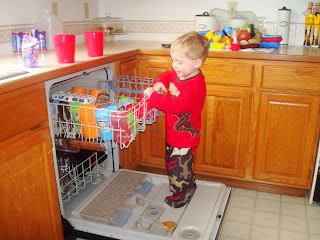 Then Preston moved on to the bathroom. I was now cleaning the bathroom. Oh how exciting my days are!! And I got to the toliet. Preston was screaming to help, so I figured what the hell. Scrub away Preston. First we fought over the toliet brush, since for some reason I was being very insistent that it stay IN the toliet. Finally he got the point and scrubbed the toliets leaving the brush in the toliet. It was pretty cute too. I would say "scrub, scrub, scrub" and he would scrub the toliet; then he would stop and look at me and I would repeat myself and he would scrub the toliet again. And let me tell you he did a pretty good job. At least until he flung toliet water at me. Then the toliet brush was taken away. And the ensuing temper tantrum (from him not me, although I was covered in toliet water!!) showed me that Preston was clearly ready for a nap.

Move on to today. After the toliet water incident, I suddenly didn't have the desire to finish cleaning the bathrooms. Call me crazy. So I left the floors for today. And when I pulled out the broom and swiffer, he was right there to help. In fact he demanded that I allow him to swiffer the floor without my help. And because I am such a good Mommy and I put his needs first, I allowed him to clean the bathroom floors. Always putting others first, that's me!!

There is a bad part to all of this help. Preston can't unload the dishwasher without standing on the dishwasher door. And for some reason I get the feeling that the dishwasher wasn't made to hold my 26.4 pound son. No really we weighed him last night. We also weighed Brad, but I'm sure that he wouldn't appreciate me posting that number on here. And in case you were wondering we weighed me too, I weighed "0". Oh how I love that scale. But back on topic, there is a bad part of all that toliet scrubbing too. Preston now runs into the bathroom just to scrub the toliet. I have caught him in there three times since yesterday scrubbing that toliet. And while I'm all for the toliet getting an extra scrub, I'm not very enthused about Preston playing in the toliet unsupervised. Also he keeps on getting into the hall closet for the swiffer. I can't keep him away from it.

I'm going to go with the cleaning as a good thing, simply because it means that he is preparing himself to be an awesome slave son and husband in the future!!! Also in case you would like to borrow my son, I will be charging the reasonable rate of $50/half hour for his cleaning services!! :D

Also I know I promised for a post about the wedding today and I'm trying I really am. I've got the picture part covered it's the words that won't happen. So I'm working on it, I swear.

that's awesome, Kim! Keep up the good work, Preston! I think it's time to get Preston a dustbuster too, then you'll really have a hand with the cleaning! lol

Here are the links for kids online games I was telling you about.